I became interested in Shortwave Listening (SWL) through my father-in-law, for he had grown up with radio and enjoyed tuning around the HF bands (just as my father did from time to time). Father’s interest lay only with broadcast stations, but my father-in-law was also interested in the amateur bands, and the air bands on VHF.

I began keeping a log of transmissions in English from broadcast stations around the world, which I picked up on a typical 1950s style domestic valve wireless, with a length of wire strung around the room. Not very good selectivity, but it’s surprising what you can pick up!

Wanting to know more about these transmissions I approached the Isle of Wight Radio Society in 1994, where I was encouraged to join a new set of classes for those studying towards their Radio Amateur’s Examination (RAE). This was not what I was primarily interested in, but I was advised that it is much more fun to be able to talk to people, instead of just listen to news broadcasts and music, and that it should not be difficult to pass with a degree in Electronics, and gain a licence to transmit. Thinking that this would be a nice little challenge, I signed up.

In three months I had my class ‘B’ licence, which enables amateurs to transmit on the VHF bands. I awaited my callsign eagerly, and soon learned it would be G7UOK. I remember the excitement of making my first transmission to a fellow ham across the water on the mainland. This was indeed a milestone in my life. But never satisfied with going only half way, I knew I had to study and practise morse code to gain a full class ‘A’ licence.

I set to straight away, and Christmas 1994 was full of dots and dashes! I used an introductory cassette tape to begin with, then a computer program on my Commodore Amiga to help me beyond individual letters and numbers. But I learned how to format messages on the radio itself, for I discovered an evening net which met to practise sending messages for the very purpose of passing the 12 word per minute test. I enjoyed this, and made friends quickly. In three months or so I heard that two of the group were shortly going to have a go at the test. I could not resist the challenge, pulled out all the stops, and joined them. I do not think I have ever been so nervous in all my life; and as I have said to many since, it was the only examination I have taken that really did not matter! However, I passed, and soon the licence came through as G0VZV, “golf zero victor zulu victor”.

I now had a licence to transmit on HF bands, which would get me out across the world (though when conditions are right, it can be done on VHF). And my aim was to conquer it! I had to work as many different countries as possible, as quickly as possible.

So up went the wire antennas between the gable and an oak tree in the corner of the garden, and my Yaesu FT101ZD transceiver was pressed into full service. The spare bedroom became my shack, which filled up nicely with ancillary equipment and information. All international stations use English, so language was never a problem, and with skill the number of countries logged steadily rose.

I never thought I would use morse code (CW) as a transmission mode, but one evening, when band conditions were pretty atrocious, I decided to have a go. This took enormous courage on my behalf, but I made myself do it, and began to enjoy it. Whilst propagation remained so poor during the low sunspot period of 1996 and 1997, I became quite keen. However, the telephony mode was always quicker and easier, and one morning the ultimate experience happened – I managed to work New Zealand. Not long after I worked Australia. To me at the time this was fantastic, for you cannot get out any further, but as my number of countries rose towards one hundred, it dawned on me that some countries are far more difficult to work because they are small or poor, so there are not many stations to work.

I became interested in portable and mobile operation in 1998 when my domestic situation took a nosedive, and the house went on the market. It was clear that I would soon lose my beloved shack, but I was determined not to lose my hobby. My new little abode would not offer the same opportunities, so, with a little financial help from Mother – thanks Mum – I bought an Icom IC706 Mk II and automatic tuner, which I quickly installed very neatly in my convertible car. A few whip antennas, and a telescopic mast for wire antennas, completed the new-look radio station, and I could now head for the hills, or natter on VHF to locals with my hands-free kit. 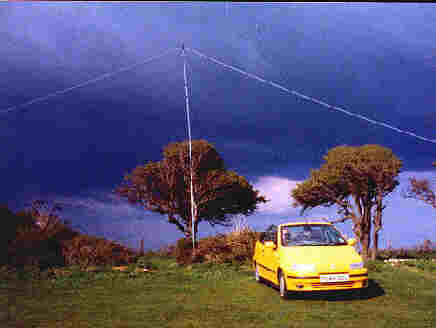 Oh yes, I must not forget the morse key – a small cheapy one which I could strap around my leg, so I could keep up my CW! I have never worked the HF bands mobile, but parked up. Many do, but I need to concentrate on my driving, and the whip antennas are rather tall – about two metres – which need secure mounting and do not like low bridges… 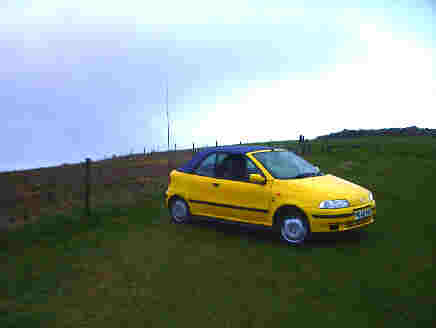 I now have my hundred countries, which means I have joined the DXCC league, and now have to think about another challenge. But enough of challenges! There’s nothing that is more fun than sitting in your car with the top down, tuning around and working a few countries! And yes, I have worked Australia on a mobile whip too – and Japan – and – well it really doesn’t matter any more.....

A little more about the hobby - for the layman

There is a lot of ignorance about this hobby. It has nothing really to do with CB – Citizen Band.

Only then are they granted a licence to transmit. Being able to work other stations all over the world is only part of the fun, however.

*Build – even design and build – your own radio or radio equipment, and believe me there is nothing like the thrill of hearing your own home-built radio work for the first time!

*Carry out your own experiments on aerials or other equipment…..

*Take part in contests on your own or with friends, and try to work as many different stations or countries as you can through the night. A year or two back a group of us, equipped with large tent, aerials, generators, computer logging facilities, food and provisions worked as a synchronised team and did very well.... 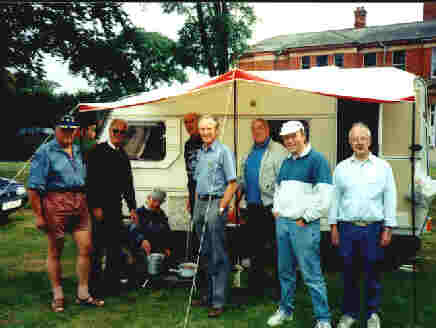 You gain points usually according to the number of countries worked and number of stations worked. Contesting is a highly cut throat business, and great fun, but it’s hard work. For more on contesting, click here

*Send and receive television pictures or video pictures or even run your own TV station, though you must not broadcast as such.

*Work mobile in your car – the other day I spoke to a man in Australia whilst sitting in my car in Yaverland car park, Isle of Wight!

*Set up a station on a hilltop with a portable aerial

*Send and receive morse code or other data transmissions

*Use packet radio which is like the Internet, only exclusively for fellow radio amateurs

*Visit rallies and lectures. Pick up some bargains, make friends and learn more about the hobby.

*Collect cards from all the countries in the world and make a lot of friends. Useful for cheap holidays?…

*Collect awards. The DXCC award is probably the most prestigious of all – 100 countries worked and acknowledged by card.

*Study propagation conditions. Most of what is understood about the ionosphere is based on data collectd by radio amateurs.

*Go sailing or fishing or walking with a handheld VHF rig and call up amateur radio friends to let them know what you are doing and that you’re OK. Cheaper than a mobile phone! Range 30 miles or more. For more serious sailing, mount an HF rig below deck, use the mast stays as an aerial and keep in regular contact hundreds or even thousands of miles away. Your mobile phone won’t be much use in the middle of the Atlantic Ocean!

*You can specialise in low power work and get special awards for working other countries or continents on less than 5 watts of power.

I could go on!

That’s what I call a hobby!  It is obsessive – BEWARE! – but is immensely rewarding. And it doesn’t have to cost a fortune to get started. Second hand equipment has now flooded the market, and is perfectly adequate. But you need that licence before you can start.

Want to know more? The Radio Society of Great Britain (RSGB) is a good place to start, or find out where your local Amateur Radio club is located and look in on club night.